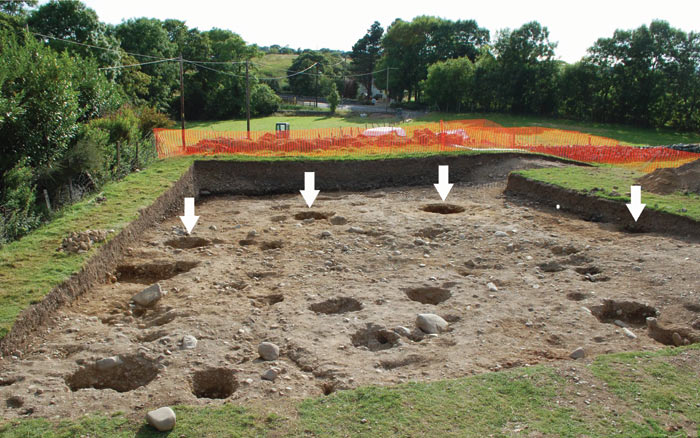 Hen Gastell is a small, but impressive site with a big ditch and outer bank but tiny interior. Work by Gwynedd Archaeological Trust in 2014-2016 proved that it is a medieval defensive site and not Iron Age as previously suspected. It was probably the home of a local Welsh lord with a timber hall or even perhaps a timber tower inside.

All the specialist reports are in as well as the radiocarbon dates; from these, Jane Kenney, the Site Director has been able to make some final conclusions about the site.

The site certainly dates to the 11th or 12th centuries AD with no trace of earlier or later activity in the inner platform. However, the remains of a possible building in the infilled ditch were uncovered during the trial trenching, so the monument may have been reused centuries after it had been abandoned.

The pits with slag in the middle of the excavation trench were the remains of a blacksmiths and dated from the same time as the main building, so the smith must have been working inside the building.

It has still not been possible to decide whether the building found in the excavation was a timber tower or a rectangular hall with a rounded end. Only further excavation would prove that.

The old people who named this site were right, as usual, and this was a type of small medieval castle, perhaps more like a manor house than a real castle. It was occupied in the 11th or 12th centuries AD by someone of significance who could afford to hire a blacksmith to make the knives and nails and other small items that the house needed. He could also afford some fancy bronze or brass decorations on his belt or horse harness and perhaps a touch of gold, even if it was only really gilt. The house was occupied for no more than about four generations, perhaps much less, and then abandoned. Some of the posts of the house were pulled out, possibly to be reused, but others left to rot. The site was then forgotten until, may be in the 16th or 17th century, a small farmhouse was built in the infilled ditch. This was replaced by the current farmhouse.

A bit more work is needed on the metal-working debris and one of the charred plant remains samples. However none of that will change the conclusions. A final report for publication is being produced with professional artefact drawings.

To find out more download the report on the excavation. This has all the specialist reports and other details. Alternatively download the summary, which is easier to read and available in Welsh.

Find out more about Hen Gastell here where there is a wealth of information as well as the excavation blog:
http://www.heneb.co.uk/hengastell/index.html

The archaeology of the 1798 Vinegar Hill Battlefield