Forestry and Archaeology guidelines in Ireland 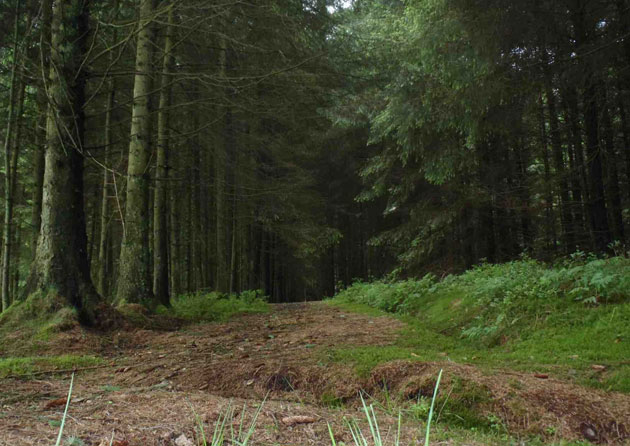 Ireland has been inhabited for almost 10,000 years and as a result the country is rich in the physical remains of human occupation. Many of these sites occur on forest land or lands likely to be developed for forestry. Archaeological sites and monuments range from substantial above-ground structures to easily damaged subterranean traces of human activity. Types of monuments vary greatly and include ancient trackways, fortifications, ecclesiastical ruins, megalithic tombs, standing stones, earthwork mounds and cairns.

While forestry is generally regarded as a low intensity land use it has the potential to seriously damage archaeological remains unless care is taken to protect sites. Both recorded and unrecorded archaeological sites and monuments in forests can be affected at all stages of the forest cycle. Heavy machinery used in forest operations carried out during the establishment phase (cultivation and drainage) through to the harvesting phase (road building, thinning and clearfelling) pose a risk to archaeological remains.  In addition, the deep rooting nature of trees can affect ancient structures, particularly if windthrow occurs as blown trees can damage remains or expose underlying features. The tree canopy and understory can also mask a site which may render in vulnerable to damage unless it is identified and protected, ideally before planting occurs.

Forestry and Archaeology Guidelines have been developed by the Forest Service, in consultation with a wide range of interested parties, to outline best practice for forest managers and operators. These include the:

The Guidelines apply to all grant-aided projects and to all activities associated with a Felling Licence.

There is very little written material specifically devoted to archaeology within forests or related to forests. Most of the recorded sites are to be found in the state forests managed by Coillte. Some examples of sites are listed below:

The forest property probably with the greatest concentration of archaeological sites in Ireland is the Burren in Co. Cavan. There are two accessible publications concerning this site:

The Millennium Forests project was established to restore and create new native woodlands and to raise awareness amongst the general public of the heritage value of this important habitat. As part of the overall management of the sites archaeological surveys were carried out on each of the sites to increase knowledge of past human activity in these areas.

The survey report provides a baseline archaeological survey for each woodland site and based upon the projected works for each site, outlines the scope of the possible impacts on archaeology and the appropriate archaeological mitigations to offset these.

A chronological overview of the main time periods in Irish prehistory and history with specific references to the archaeological sites found within and in the vicinity of the forest sites surveyed in this project is also given. The report can be accessed by clicking here.

In the late 1990s the Heritage Council recognised the need for policies in regard to the beneficial development of forestry in relation to the environmental and manmade heritage. This report titled Archaeology and Forestry in Ireland was commissioned by the Council in 1998 and compiled by Gina Johnstone. It was intended as a review of the existing structures at the time with recommendations that would aid in the development of future policy. It was produced before the publication of the Forestry and Archaeology Guidelines. While many of the issues raised and recommendations made have been addressed in the Guidelines the report gives a useful background to archaeology and Irish forests.

For a European overview of archaeology and forestry the following volume, which contains contributions from 13 different European countries and which examines the challenges posed by agriculture, forestry and other rural land uses in terms of the long-term conservation of Europe’s archaeological sites and the management of its historic landscapes, is a good introduction. It was edited by members of the European Association of Archaeologists (EAA) and Europae Archaeologiae Consilium (EAC) Joint Working Group on Farming, Forestry and Rural Land Management, and is based on papers given at various annual conferences/meetings of the two associations between 2004 and 2009.

A very accessible and interesting book on the topic is also a publication from the Netherlands.