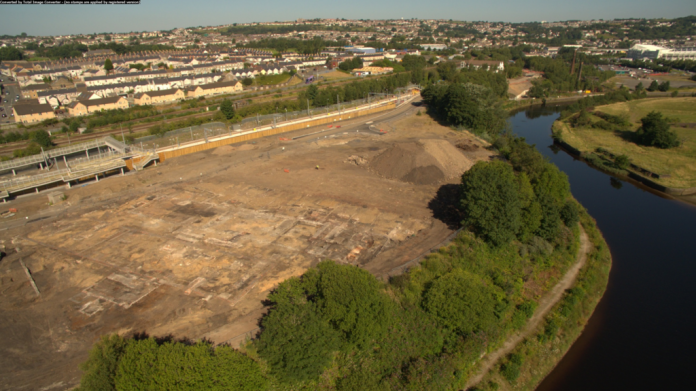 The 19th century industrial heritage of Swansea has been identified as being of national significance.  Producing a rich industrial sequence spanning the last 180 years the excavation at the Hastie’s Site revealed well-preserved foundations of an Iron Foundry building that formed part of the wider Hafod-Morfa industrial complex.

Within the interior of the foundry surviving industrial features included four furnaces and flues, machinery, tools and metalworking debris. Adjacent to the building was a sunken tramway, part of the wider development of the smelting industry and associated transport system linked to the River Tawe.  The original buildings, including the Iron Foundry and associated sunken tramway, date from between 1836 and 1847 and were present when the site was surveyed for the 1st ed OS Map (1879).  Construction, repair and alteration to these buildings, transport and associated machinery was in line with the modification, potential metallurgical changes and the expansion in the industrial processes on site.  These changes can be directly related to historic map evidence from 1879 onwards and reflect development and decline in the industrial history of Swansea.

The thematic and regional research frameworks stress the need to develop our understanding of forge and foundry structural remains of 19th century Ironworks and brass production sites undertaking scientific analysis of residual materials and research into understanding the industrial organisation at differing scales of operation.

The excavations identified the well-preserved footprint of the 19th century Hafod Iron Foundry which retained the 6-8 ton capacity reverberatory furnace foundations, deep casting pit, stone crane base and stonefly-wheel support present. This type of furnace is typical of older iron furnace technology but may have continued in use as such furnaces were also employed at later dates to melt pig iron for foundry work.  The later addition of the 4m deep casting pit suggests possible use and change in processes for the vertical casting of beams (perhaps c. 3-4 tons).  Smaller, probable contemporary castings are also evident as faint traces in the casting sand, and as smaller brick casting pits.

The remains of the sunken tramway, dock loading bay (for the nearby canal) and the northern tramway formed the links to the River Tawe and the wider rail-road-canal system; reflecting the growth in the transport system for the metalworking industry which continued until its disuse in the 20th century.  The complex had several other buildings of which the Pattern Shop remains were excavated, this was recorded as extant on the 1879 map.

During the late 19thcentury – early 20th century, expansion and development of the metal works required additional furnaces and at least partially indicate a change in the type of metalworking.  A later, secondary, small early to mid-20th century reverberatory furnace added to the eastern end of the main Foundry building was associated with this phase. Additional, late-19th /early-20th century trap-door furnaces, which are much smaller in capacity were also constructed and probably also reflect a move to non-ferrous metal work.  These additional furnaces may indicate a change to copper production in the early 20thcentury.

By 1950 parts of the site were altered and some of the 19th century buildings and the sunken trackway were demolished and infilled.  However, significant parts of the original Iron Foundry building seem to have survived and been incorporated into later 20th century structures creating structural continuity. Within the new 1950’s building reuse of older tramlines as steel beams and furnace bricks for machine bases may have reflected the decline in prosperity for the metalworking industry in the region.  Many of the concrete settings and fixings, a hearth base probably associated with lead working and the remains of a separate flue survived and were recorded and excavated. These were not demolished until 2008, when the whole site was levelled.

Several artefacts from the excavation have already been requested by the National Museum of Wales and are considered significant to the national collections of 19th and early 20th century industrial material.  Artefacts recovered included ironworking tools, copper alloy objects, crucible fragments, structural materials and residual waste material from the site.  The19th century metal working in Swansea has not been subject to any previous scientific studies.  Although large quantities of slag waste were present on the site, only those associated with the four furnaces may have utility in distinguishing between ferrous and non-ferrous production, and other forms of more detailed analysis may be appropriate here.  Combined with artefactual evidence the analysis of the metalworking debris may highlight diversification and change in metallurgy due to the decline in Iron production.  Reuse of materials in later buildings, machine bases and furnaces during the turn of the century from changes in land use could confirm this. Fitting the preliminary analysis of the archaeological work to the thematic and regional research frameworks it is clear to see the significant potential the site has to offer.