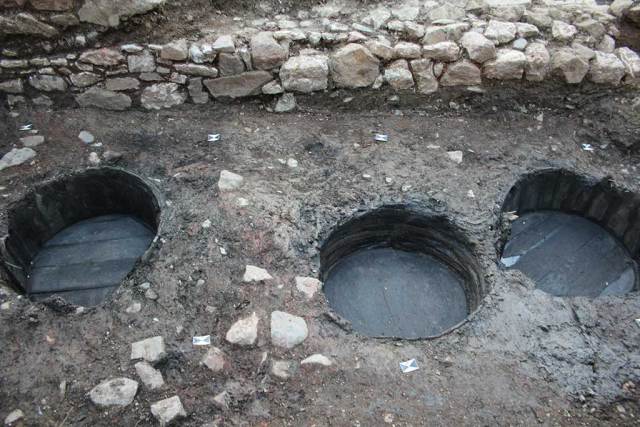 The Exeter Fieldwork Team from Cotswold Archaeology were  undertaking an excavation in Newton Abbot town centre.

Wolborough Street was the medieval town’s main thoroughfare. The site covers the rear parts of former medieval burgage plots which fronted onto the street. The front parts of these plots were heavily disturbed by the construction of two large town houses in the late 17th/18th centuries.

The team have found wall foundations and surfaces associated with both the post-medieval buildings at the site and the medieval tenements. Waterlogged conditions have allowed the preservation of organic material such as wood and leather. Cotswold archaeologists have uncovered structural timbers and a series of wooden tubs or barrel bases, one of which contained a complete child’s leather shoe. There are also two stone-built wells, one of which has had a nice millstone tipped into it. The dating of these features/artefacts is currently uncertain, but they appear to be late medieval/early post-medieval.

Over the next few weeks, they  gradually peeled away the medieval layers and go deeper. As the name suggests, Newton Abbot was essentially founded as a medieval new town, but there is some evidence for 6th/7th-century activity in the immediate vicinity of the site so they may find earlier remains lurking below the medieval burgage plots.