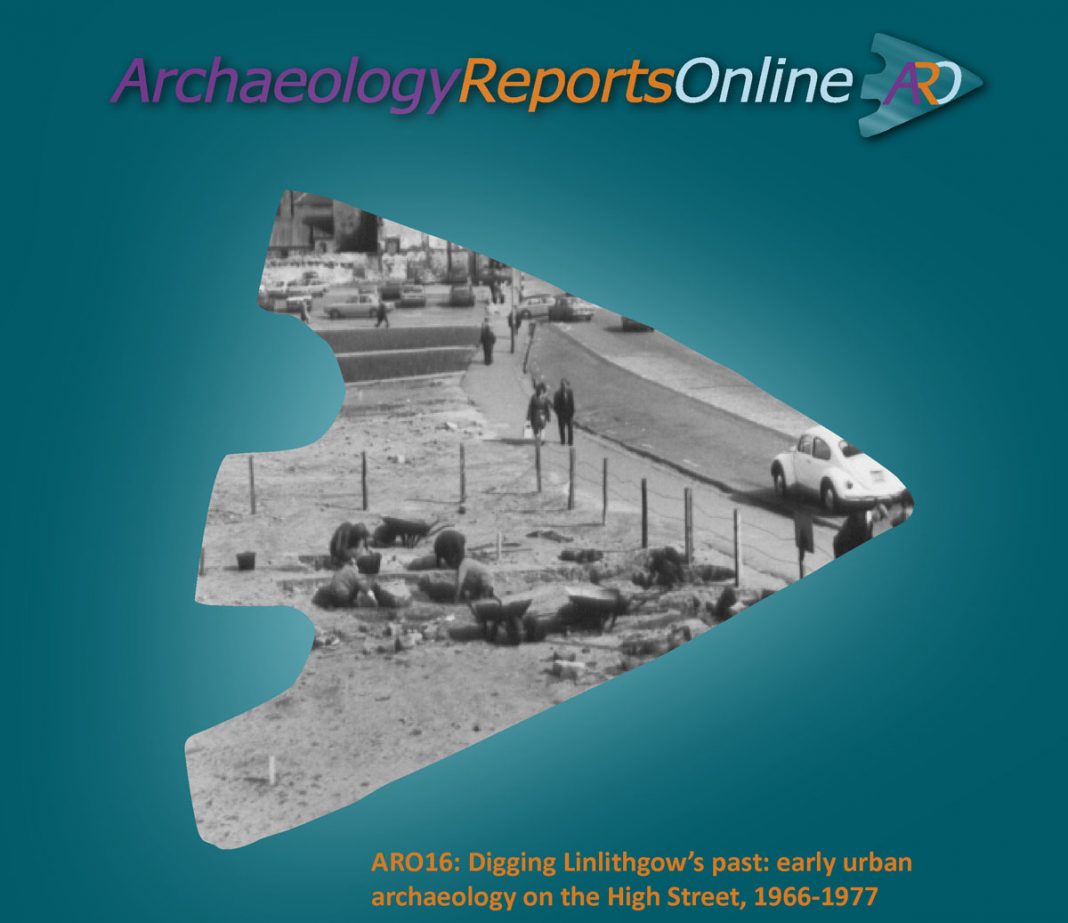 Digging a Late Medieval Industrial Quarter in a Scottish Burgh

‘The historic burgh of Linlithgow underwent an extensive programme of town centre redevelopment in the 1960s and 1970s, affecting large and relatively undisturbed sites in highly significant locations,’ said Catherine Smith of Alder Archaeology, who compiled the publication. ‘There was very little provision for urban archaeology in Scotland at that time, but the obvious importance of the sites prompted a series of responses from those working in the field, in some cases improvised with little or no resources. The three excavations in this publication recovered an important record of a large part of Linlithgow’s archaeology. While there have been several subsequent excavations in Linlithgow, the excavations reported here were the first to examine significant areas in the heart of the medieval burgh.’

The burgh of Linlithgow is first recorded in the reign of David I (1124-53), when the king granted the ‘church of Linlidcu with chapels and lands inside the burgh and outside, and all rights pertaining to the foresaid church’ to St Andrews Cathedral in 1140 or 1141. The burgh was in essence a long single street, the High Street, forming part of the route westwards from Edinburgh to Stirling and Glasgow, with a shorter arm, Kirkgate, leading northwards to the royal palace and the parish church.

Linlithgow benefited from the loss of Berwick to the English in the later fourteenth and early fifteenth centuries, raising some £600-700 Scots from exports. Over three quarters of its exports were wool, with the rest comprising hides and woolfells in the earlier period, and with the addition of cloth in the later period. Linlithgow’s importance at this time is evident from its inclusion in 1369 as a member of the Court of the Four Burghs, which met to define the law and custom of Scottish burghs and was the predecessor of the Convention of Royal Burghs. However, Linlithgow suffered economic decline in the fifteenth and sixteenth centuries,

The wealth of the burgh was nevertheless derived from the processing of the raw materials from its hinterland into manufactured goods for sale in the burgh market to townsmen and outsiders. Leatherworking became Linlithgow’s principal industry and by the end of the eighteenth century there were 17 tanners in the burgh processing some 20,000 skins and hides a year, 13 tawers (who made hides and skins into leather by steeping

in a solution of alum and salt) processing up to 60,000 skins and hides a year, 18 curriers (who dressed and coloured tanned leather) as well as 100 shoemakers producing 24,000 pairs of shoes a year.

This documentary evidence for the importance of tanning and related trades to Linlithgow in general and the identification of tanners and shoemakers in the 17th-19th centuries at the excavated properties themselves, was corroborated by the results from the excavations, which extends the history of tanning in this area back into the fifteenth and sixteenth centuries. The addition of the largest assemblage of antler waste ever found in a Scottish burgh from 326-332 High Street (the 1973 excavation) confirms the remarkable concentration of animal product industries in this part of Linlithgow, and compares well with the excavated evidence of intensive and repeated construction of tan pits and related structures in tightly constrained sites. The antler assemblage from Linlithgow includes evidence of craft working on a larger scale than previously found in excavations of medieval urban Scottish sites. Occasionally a few pieces of antler are found in such excavations, but never in such quantities.

Similarly, the well-preserved and complex sequence of walls, surfaces, closes and pits should in principle throw light upon the nature and layout of the burgage plots. In practice, the evidence from these sites was too fragmentary to draw ambitious morphological conclusions, but it is clear that the evidence is likely to survive on other similar sites in the High Street of Linlithgow.

The excavations on Linlithgow High Street provided an opportunity to examine a variety of artefactual evidence, ranging in date from the twelfth or thirteenth centuries until recent times. The medieval artefacts occurred mainly as isolated finds rather than as components of discrete assemblages. Nevertheless, some examples, like the Romanesque buckle and the padlock casing extend the range of known types from this part of Scotland. Among the post-medieval material, a small group of iron objects from a pit includes an interesting concentration of knives and of lock components. A group of glass beads includes examples, which, although similar in size, exhibit a variety of forms and irregularities, serving to demonstrate the lack of any rigid standardisation in manufactured items even in the eighteenth and nineteenth centuries.

These sites nonetheless demonstrated the quality of surviving evidence in the burgh and the potential for further investigation as other sites become available, particularly in relation to street widths, burgage plot morphology, and the development of medieval and later industry.

The full results of this research, which was funded by Historic Scotland, ARO16: Digging Linlithgow’s past: early urban archaeology on the High Street, 1966-1977, has just been published for the first time and is now freely available to download from the ARO website – www.archaeologyreportsonline.com. The report, compiled by Catherine Smith of Alder Archaeology Ltd, was written by the late Doreen Hunter, Catherine Brooks, David Caldwell, Geoffrey Stell and Mike Middleton, with contributions by David P Bowler, Adrian Cox, Derek W Hall, Nicholas Holmes, David Perry and Catherine Smith and illustrations by Mike Middleton, David Munro and the late Frank W Moran.