A Late Bronze Age hoard of four gold and copper artefacts, which are thought to be dated to around 1000-800 BC, or 3,000-2,800 years ago, have been declared treasure by H.M. Coroner for North West Wales. 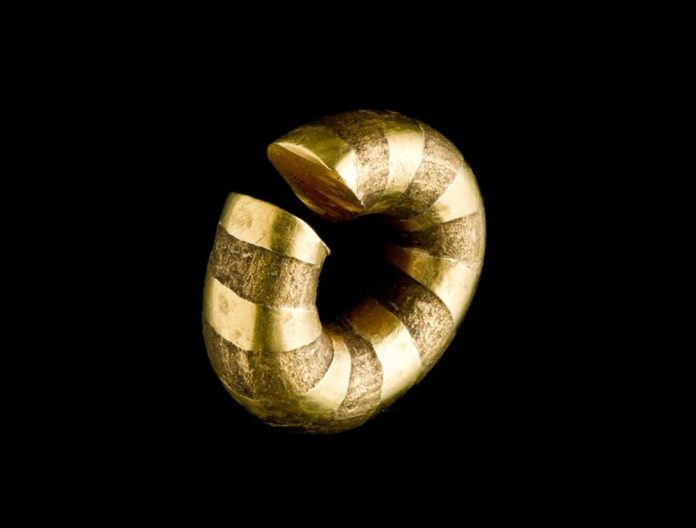 The hoard, including a gold penannular ring and three fragments of copper ingot, were discovered in the Community of Cwm Cadnant in May and June 2013 by Mr. Philip Cooper.

The artefacts were discovered a few metres apart from each other while Mr. Cooper was metal detecting on farm land. The artefacts, once buried together as a hoard group, had been disturbed through recent farming activity.

The gold ring has striped decoration, formed by applying a silver strip in spiral fashion around the curved gold bar. The ring has flat-ended terminals, with a gap between them. It may be identified as an example of small Bronze Age adornment known as a hair-ring, although it is possible it was used as an ear-ring, the whole bar passing through a hole in the ear lobe.  One side of the ring is heavily worn through use by its original owner.

Hair-rings are discovered in significant numbers across Ireland and England, with scatters extending across Scotland, France, Belgium and The Netherlands. In north-west Wales, similar examples have been found at Trearddur, Anglesey and Graianog, Gwynedd.

Copper and bronze ingots of plano-convex or cake form are commonly buried within Late Bronze Age hoards. They were transported and exchanged by sea and functioned as the raw material to cast bronze tools and weapons. 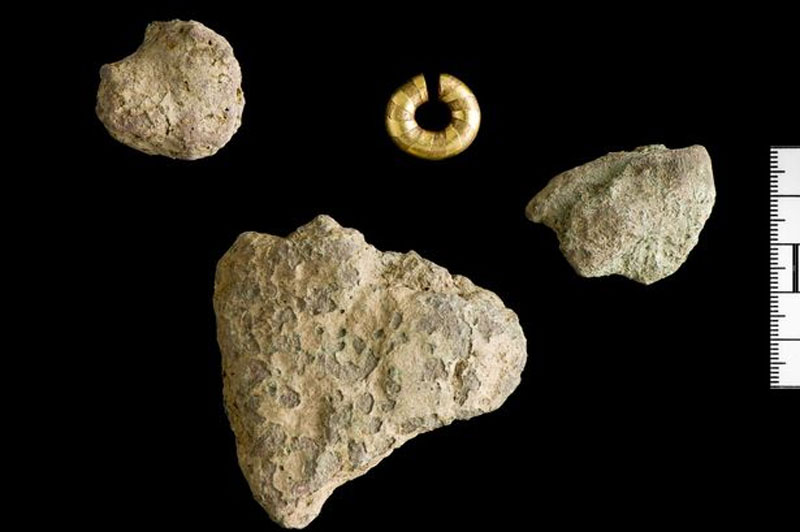 Adam Gwilt, Principal Curator for Prehistory at Amgueddfa Cymru – National Museum Wales said:  “This gold hair-ring is finely made and was once worn by a man or woman of some standing within their community. It could have been made of gold from Wales or Ireland. The copper ingot fragments are an important association with the ring. It would be interesting to know whether they were transported and exchanged over a long distance by sea, or perhaps smelted from local ores mined at Parys Mountain or The Great Orme. ”

Entry to National Museum Wales museums is free, thanks to the support of the Welsh Government.

The Portable Antiquities Scheme in Wales (PAS Cymru) is a mechanism to record and publish archaeological finds made by members of the public. It has proved a highly effective means of capturing vital archaeological information, while engaging with non-traditional museum audiences and communities.