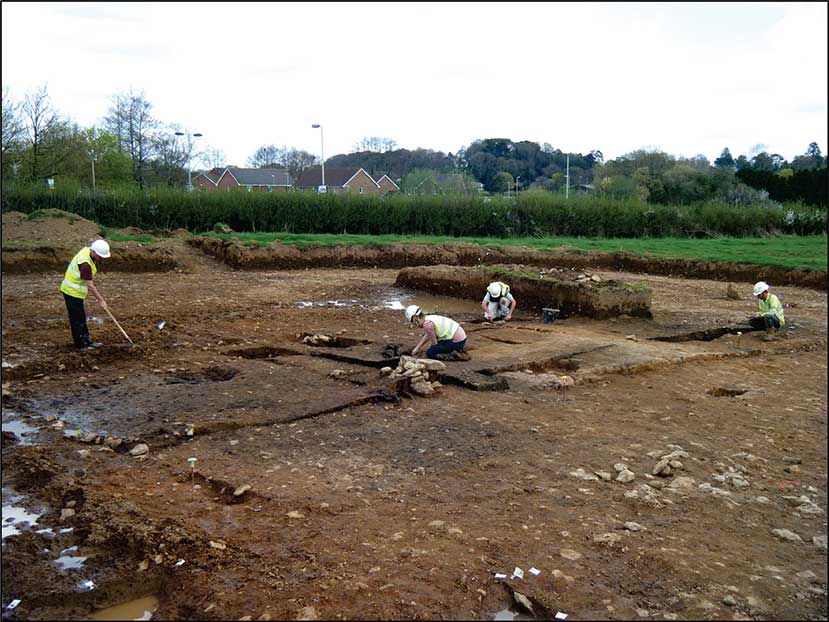 In 2014 Cotswold Archaeology excavated a medieval building in Ottery St Mary, Devon, and the site is the subject of their first publication in the online journal ‘Internet Archaeology’. The excavations took place in advance of housing development at Island Farm, Ottery St Mary, and revealed what is interpreted as a medieval longhouse, dating to c. AD 1250–1350.

The building had been destroyed by a disastrous fire. Although the fire destroyed the building, in doing so it carbonised structural timbers and other botanical remains, which have provided us with fantastically well-preserved evidence for the building’s structure and its contents. We have been able to use identifications of wood species and spatial arrangements of the charred remains to suggest the materials employed in the construction of the building and to identify some of its contents, which included a variety of crops stored in one of its rooms. Other finds include fragments derived from the repair of copper-alloy vessels, an axe-head, and, remarkably, a Bronze Age palstave, which seems to have been found and kept by the medieval occupants of the building.

Detailed analysis has provided us with unusual detail of the types of wood used in the construction of the building, principally oak for the timber framing and alder and willow for its wattle panelling. We have also been able to identify the composition of the harvest stored in part of the building, which included oats, wheat, rye, barley, broad beans, peas and vetches.

The longhouse has similarities with other examples known from Devon, although our interpretation of it as a partial timber-framed building appears to be unique in the archaeological record from the county. The range of crops identified provides physical evidence of what is recorded in historical documents from the period, but also suggests others. The Internet Archaeology report includes primary data on the botanical remains to allow readers to interrogate the information for further (and perhaps different) insights.

The fieldwork was undertaken on behalf of Waddeton Park Ltd in advance of the construction of new housing by Bovis Homes.

Shipwreck Timbers Give up their Secrets