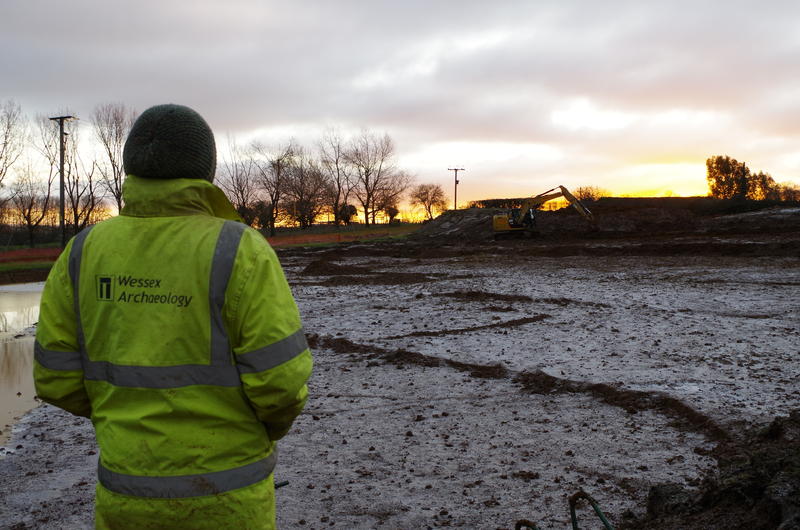 A recent excavation in Badgers Field on the south side of Chipping Campden, Gloucestershire, has provided the first archaeological evidence from the town for Saxon settlement.

The excavation, undertaken by Wessex Bristol Office in advance of a proposed residential development off George Lane, also provided evidence for prehistoric activity in the form of flint debitage, some of it Mesolithic, and pottery dating to the Early Bronze Age and the Iron Age. The main features on the site were a series of ditches defining more than one phase of field system, including a trackway. Although poorly dated, at least one of the phases of field system is likely to have been Romano-British on the basis of the recovered pottery, tile and animal bone.
A number of sherds of Saxon pottery were also recovered from the ditches, but these may have been intrusive. However, the feature with the largest finds assemblage was an irregularly shaped shallow pit which contained 35 early Saxon sherds (6th/7th century AD).
The pottery fabrics are hard-fired and predominantly coarsely sandy; in addition, three are organic-tempered and two are in calcite-tempered fabrics. Diagnostic sherds are limited to two small rims, and one body sherd is stamp-decorated (quartered circles).
The pit also contained a small quantity of fired clay and over a kilogram of animal bone, comprising a fragment of cattle skull and several sheep bones, including a complete horn core from a ram which had saw marks at its base. The pit also produced charred grains of barley and wheat, fragments of hazelnut shell and weed seeds (grasses, oats and legumes), although the shallowness of the pit means that some of this material may have been intrusive.
There was also fired clay, animal bone (part of a cattle skull and several sheep bones including a complete horn core), and charred grains of barley and wheat and fragments of hazelnut shell. Together the evidence suggests the presence on the edge of the town of a small rural Early Saxon settlement practicing a mixed agricultural economy.
To find out more about this site read the project page here.
By Kirtsy Nichols, Project Manager

Raising the Bar – inspired archaeology in the PUBlic domain