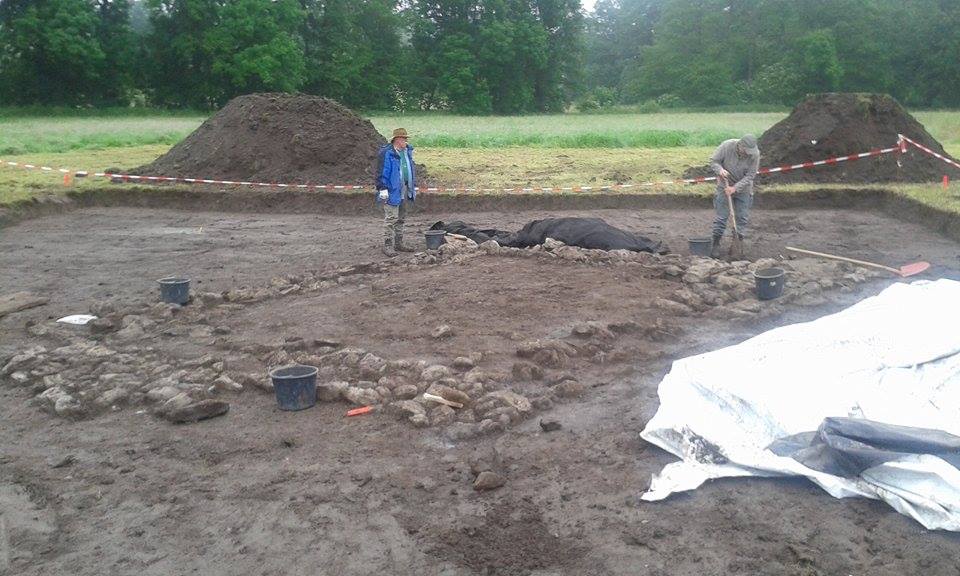 Near the beautiful medieval town of Muschenheim in central Germany  a new site was discovered when pottery shards were recognised during field surveys 25 years ago.

In 1993 the Commission for Archaeological Research (CAL) led the first archaeological excavation where they found a settlement that had existed between the 8th to 12th centuries AD. In addition, remains of an Iron Age settlement were found dating to the 4th and 3rd century. BC in the same place.

Since 2014 the State Department  hessenArchäologie has led a series of new excavations that continue to extend the fragmentary image of this rural settlement.

So far a whole series of building structures have been revealed. In particular, several  “pit houses” or grubenhaus. These are often found with many spindle whorls and suggest these scooped buildings were used primarily for weaving. In addition, traces were documented from other wooden buildings ,

Within the larger area, despite centuries of intensive agricultural use, several furnaces were uncovered, which relate to recovered materials used in the manufacturing or processing of iron.

The medieval site, which was likely named “Arnsburg” according to written sources from the 12th century, consisted of probably only one or two villages, lying about 250m north of the castle Arnsburg, seat of Lords of Münzenberg.

The previously recovered finds ranging from 7th to the late 12th century AD, with numerous ceramic material  from this period.

In addition, the archaeologists recovered part of an iron “Wolf Angel” from the 8th century, which was used in hunting wolves. The Wolfsjagd, was a wolf trap, consisting of two metal parts and a connecting chain – hung by the hook to a tree, the vicious barbs were baited with meat so that the wolf would jump up to snap at the food and been left hanging from the cruel hook.

A pit house from the first century AD as well as Roman finds provide tantalising evidence of other activity to be explored in the area.

Archaeological investigations are kindly supported by donations from Volksbank eG Mittelhessen and the Oberhessischen Historical Society.

To get involved in the current work digging up and recording a 12th-13th century stone building (above) as well as a number of Grubenhäuser and pits possibly dating from Roman to the late medieval periods.

You do not need to speak German to attend this dig, but you might learn some by accident whilst here!

There is no volunteering fee and the excavation runs from now until the 15th of July.

Accommodation is provided for free at one of the staff-members’ house (warning, cats!), Lunch is provided on site, dinners and breakfasts are your responsibility, but there is help!

Work Based Learning – Health and Safety