Southern Water worked with  Archaeology South East to preserve the past while laying a new laying a water main along Mansbridge Road in Southampton.

There’s more to laying a water main than you might think. When a pipe trench is dug across a road or even through a field it can sometimes reveal the evidence of ancient communities and fragments of time long since buried. That’s why at Southern Water worked closely with Archaeology South-East to ensure that any of their activities are closely monitored to preserve or record any buried archaeology.

The archaeological potential in the immediate area was significant. A settlement at Swaythling is first recorded in AD 909 and two mills are also recorded in the Domesday Survey of AD 1086, that were possibly located in the vicinity of the later mills at Woodmill and Gaters Mill. Thanks to pre-project investigation, they also knew that a medieval manor house stood close to the western end of the scheme prior to its demolition in the 1970s. 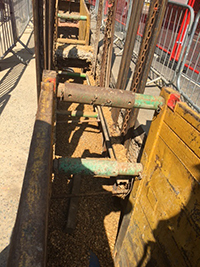 In addition to watching out for archaeological evidence, the analysis of the soils taken from a bore hole  revealed a peat deposit adjacent to the River Itchen which formed approximately 9,000 years ago in the Mesolithic period and continued to develop to the 16th century AD.

“Working closely with Southern Water at an early stage in the design process is important in order to assess the risk of encountering known and unknown heritage assets,” says Neil Griffin, project manager for Archaeology South East.

“We will maintain a continual watching brief over the scheme once the excavations reach the areas of interest.”

So the next time you pass the works on Mansbridge Road in Southampton, remember that archaeology is hidden right below your feet – and thanks to archaeologists – nothing is lost.

CEMEX sand helps bury the past