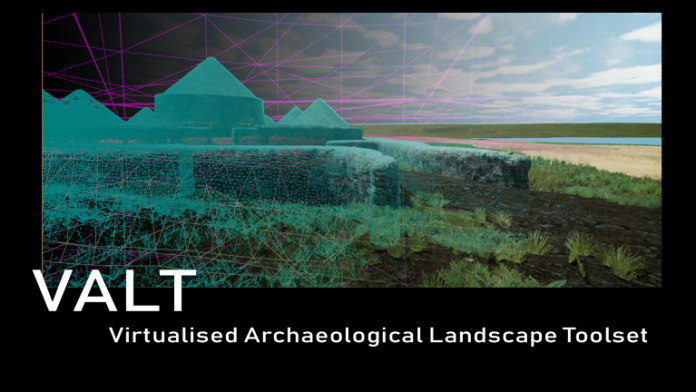 Virtual Reality and its use in archaeology is nothing new, but it has almost exclusively been relegated to applications for public engagement or presentation of sites to the general public. By comparison, there has been little use of this technology in the study and analysis of archaeological data and sites.

Stepping into this void is the VALT application: Virtualised Archaeological Landscapes Toolset.

VALT is a proof-of-concept application, created to explore the abilities of modern games engines to provide archaeological tools for landscape investigation.

The general premise of the software is to provide the means to convert LIDAR landscape data into a virtual landscape that can be explored and analysed using a VR interface. The conversion and import of the landscape data should be as automated as possible to allow users of most technical abilities to utilise the software. It should allow notes, records and other outputs from use within the virtual environment to be outputted to mediums outside the application, and should also allow multiple users to engage within the same landscape simultaneously. While of course, this is no substitute for actually being physically present in the field, it does allow for some measure of control that is not possible in the real world, such as control of the sun, weather and even sounds and modern developments. It would also be possible to accentuate the height of the LIDAR data making certain features more prominent.

An application in search of a host

The VALT application was born out of a PhD project that sadly never saw submission. The project lives on, and I am currently seeking funding or hosting at an organisation to take this software beyond its initial development up to a full release.

As of the end of the Archaeology Ex Machina PhD project, the VALT application is deemed to be in Beta version 0.1. By this, the application is in a working state with the basic functionality working and the proof of concept defined and proven by its use. It is unoptimized and hard-coded to one particular VR system (specifically the Windows Mixed Reality system) and does not feature any scalability and so is unlikely to run very well on less powerful computer systems than the one it was developed on. A tech demo of the application can be downloaded from the current VALT website ( www.diggah.net/VALT ) and requires SteamVR compatible VR hardware as well as a gaming specification computer to run properly. The current software allows the user to experience two case study sites with various resolutions of LIDAR data, complete with the addition of reconstructed buildings for use as focal points.

Further development of the software is categorised into the following areas:

The multi-user aspect of this software is proving to be the most highly anticipated, as it would allow multiple users to experience the same landscape data while potentially being physically anywhere on the planet with a decent internet connection. It should be mentioned that this application has so far been the work of only one developer.

This method of investigating landscape data well received in its alpha testing phase and has the potential to become a very powerful tool for the collaborative exploration of archaeological landscapes, especially in a post-pandemic world. Further funded development and/or inclusion within a presiding organisation can only add to its functionality and allow archaeologists to make analytical use of this technology.