Home Professional News Archaeologists can be a developer’s best ally

Field archaeology is not a job for the faint-hearted. It can involve a huge amount of time spent patiently watching as machines lift slabs or claw out the basements and cellars of old buildings. It can also mean hard physical labour in uncomfortable situations in quarries, demolition and construction sites in all weathers for relatively little money.

For most of the time it’s anything but glamorous – and a long way from the impression you might get from TV programmes like Time Team and Meet the Ancestors.

Yet these programmes have done a great deal to bring the importance of archaeology into public consciousness. By making archaeology interesting and popular, they help to build our collective memory and create a wider sense of history, place and belonging. Buried remains are non-renewable – so if they’re gouged out and disappear without record we’re the poorer for it, and part of our heritage is lost forever. And there are the important economic benefits of attracting tourists who are keen to get close to relics of the past.

So how do we square the desire to protect important and valuable archaeological remains while coupling the need to protect the interests and wealth-creating activities of developers?

A number of evaluative methods comprising geophysical surveys, field working and trial trenching are used to determine the possible presence of buried archaeological remains. Field walking is a relatively simple way of detecting pottery scatters or concentrations of flints.  Aerial photography can also be used to show crop marks or soil patterns that might suggest that there’s even more to find underneath the ground.

The next step is often to put in trial trenches in an area that’s suspected of containing remains.  It’s an intrusive method which determines whether there are any archaeological remains, and identifies their extent, significance and date.   Every case is different of course, but there are a number of typical ways of dealing with a find.

As a condition of planning consent prior to development, the developer may have to carry out “preservation by record”. This normally means that the developer has to fund a much larger excavation to expose remains to a greater extent than is possible with a small trial trench. It may then often prove to be in the interests of the developer to “preserve in situ”. This means redesigning the scheme to ensure that the affected area is protected and left as open space rather than being developed. Another option is to “raft over” the area so that the foundation design floats above the ground instead of penetrating it so as not to destroy the buried remains. In very unusual cases the DCO in combination with English Heritage/CADW or Historic Scotland might consider the site of such national significance that the area cannot be developed upon at all, and classify the land as a scheduled monument. (though to say this is rare, is an understatement BAJR note) 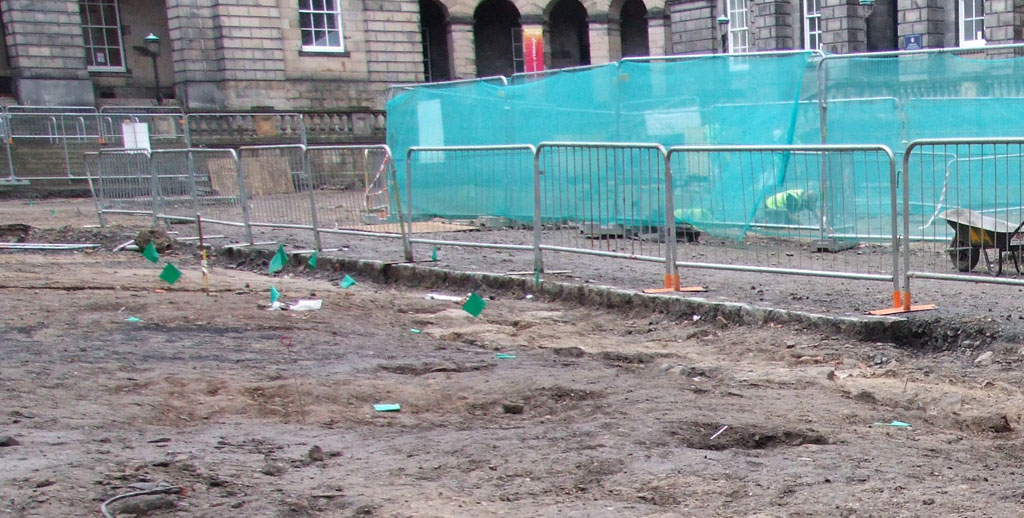 So how likely is it that new developments will unearth ancient sites? The honest answer is that you never know. We live in an old country that has been farmed and laid out for centuries. You might think that remains are most likely to be found in green fields, but they turn up too in the middle of cities as well.

When Birmingham’s Bull Ring was being redeveloped, well preserved medieval layers were discovered under two metres of later development, covered up by vast quantities of earth brought in during the 1800s to prevent flooding. And you might not expect to find an entire Bronze Age log boat at the bottom of a quarry, preserved by anaerobic silt. But on this occasion rather than excavating it and facing a huge preservation cost and ongoing preservation issues, the decision was made to preserve it in situ, demarcated within the quarry, covered in natural material to recreate its original burial environment.

Wardell Armstrong’s recent and certainly most breathtaking discovery is at the site of a large mixed use development in Northamptonshire. Two years ago, investigations in the southern part of the development site uncovered well preserved Iron Age smelting furnaces. Prior to the development of the northern part of the site, extensive geophysical survey suggested the presence of archaeological remains here as well. These too might have been expected to be industrial. But it was only when we started to trench that we found Roman remains that could never have been predicted. Walls and foundations, painted wall plaster, decorated tiles, large amounts of pottery, a bone knife handle, a copper alloy lead weight… all the signs of an extremely high status Roman villa site owned by a wealthy individual.

Help IS at hand for developers!

So who should developers turn to for expert help to handle these sensitive issues? After all, they often call for a fairly unusual combination of technical expertise, business sense and clear negotiation skills. Archaeological contractors certainly have an important and useful part to play in carrying out field work and excavation and then post excavation research and reporting the results.

Finding the remains of a Roman villa certainly doesn’t happen every day. But by expecting the unexpected, finding out early and working with the right consultancy to help manage the options, archaeological remains don’t have to be the threat to developers that they’re sometimes perceived to be.