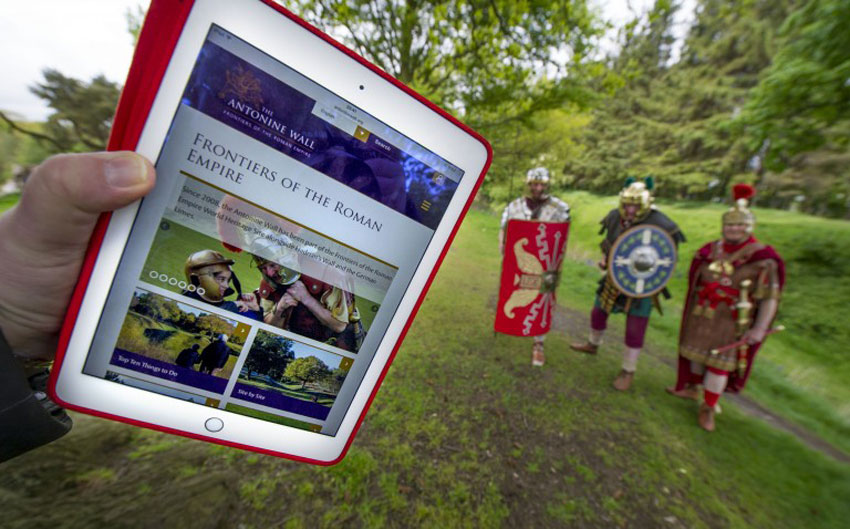 Featuring an interactive map, downloadable walking and cycling guides, and in-depth information on the archaeology and  history of the wall, the new site will give visitors all the information they need to explore the wonders of the most northerly section of the Frontiers of the Roman Empire World Heritage Site. It provides information on both sites and museums, and key things to see and do for families and tourists planning a day out along the Wall. In addition to visitor information, the website contains specially developed educational and research resources for all ages, including a database of archaeological artefacts discovered along the wall.

The website is multilingual,  available in English, German and Gaelic, and offers a platform to showcase the work delivered by Scottish and international partners. It was developed and funded collaboratively by the six Partners (East Dunbartonshire, Falkirk, Glasgow City, Historic Scotland, North Lanarkshire, and West Dunbartonshire) who manage the Antonine Wall.

The Antonine Wall stretches 37 miles (60km) across the Scottish Central Belt.  In its heyday around 7,000 soldiers were stationed along it, from countries as far away as modern day Syria, Spain and Algeria.

“This website is a fantastic resource for visitors and educators alike. With summer fast approaching, there has never been a better time to get out and explore the wall and we’ve included lots of resources to help with that, from suggested cycling routes to an events page.

“In addition, there are lots of fun Roman learning resources for families, teachers and students, and the fact the site is available in three languages makes it a useful language and a history resource for teachers working with the Curriculum for Excellence.”