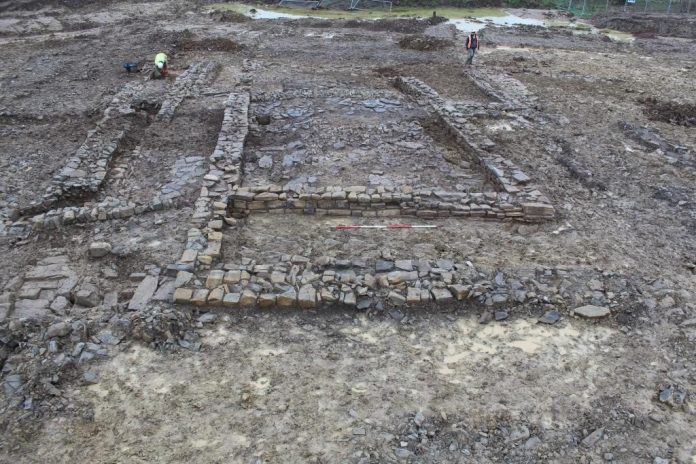 Between September 2019 and January 2020, Cotswold Archaeology undertook an excavation at Llanwern in South Wales on behalf of RPS Planning and Development and Redrow, on a site occupying the east face of a hill overlooking the Gwent Levels.

The investigations revealed a complex including several stone-founded Roman buildings, terraced into the hillside. These included two stone-built circular buildings, a rectangular structure and an apsidal structure, with evidence for activity between the 2nd and 4th centuries AD. At least three other buildings were represented by partial ring-ditches, one containing a kiln or oven. Environmental samples taken from the oven may allow its function to be determined.

The rectangular structure, which measured 17m long and 7m wide, appears to have been the main building at the site. It had been subject to at least three phases of modification over time. The western side of the building had been cut into the terrace, with made ground to the east used to provide a level construction surface for the structure’s eastern extent. Two areas of mosaic flooring were identified, possibly representing a room and an associated corridor, which had potentially been separated by a wooden partition wall. The mosaics have been dated on stylistic grounds to the 4th century AD.

The function of the rectangular building is currently uncertain, although a complex series of stone-lined culverts drained water from a group of springheads at the west of the site down to the east, indicating that water-management played an important role in the use of the site. Many finds were recovered, including large quantities of Roman pottery, animal bone, ceramic building material (including tile), brooches and coins. The presence of unusual plate brooches amongst the assemblage raise questions as to whether the complex may have had a religious focus. One of the tile fragments bears the stamp of the Roman military unit Legio II Augusta, which was stationed at nearby Caerleon, suggesting a possible connection between the sites.

To the immediate north of the rectangular building, an impressive and well-constructed east-west aligned metalled trackway was formed from large unworked limestone blocks; the trackway measured at least 50m long and 4.8m wide, with its size and method of construction suggestive of a high volume of traffic.

At the west end of the site, an apsidal structure was terraced into the hillside; the internal area of the structure contained natural stone that had been exposed to create an area of hard standing, with a surface constructed on top, presumably for extra consolidation. The function of the structure is currently uncertain; interpretative possibilities being considered include a nymphaeum, a church, a shrine or possibly even a theatre, which utilised the slope as a spectator area.

This structure abutted a heavily truncated rectangular building, which contained a cremation burial and an inhumation burial. The latter burial had been placed in a prone (face-down) position. These burials raise the possibility that this building formed part of a mausoleum.

Other features identified at the site include an area of metalworking, water tanks and features interpreted as possible quarry pits.

It is hoped that analysis during the post-excavation stage will allow questions about some of the unusual aspects of the site to be answered.