Home General News A Bronze Age Cremation Cemetery and Other Discoveries on the A477 Road... 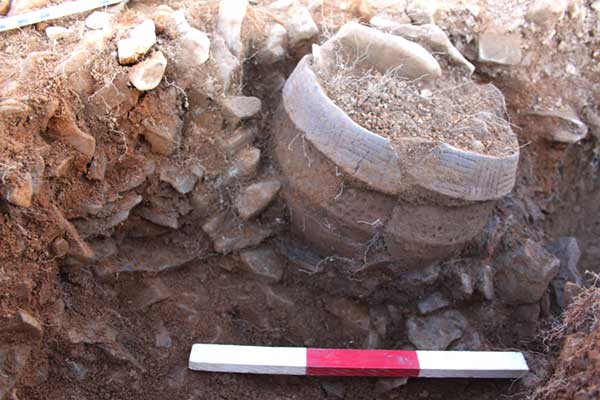 Linear schemes such as road construction can transect large areas of land and so provide exciting opportunities for archaeological discoveries, and in this respect the archaeological investigations in advance of the A477 road improvements between Red Roses and St Clears in Carmarthenshire did not disappoint. Funded by the Welsh Government and facilitated by Ramboll, a programme of planning, survey, evaluation and excavation along the 9.5km length of the scheme identified numerous and varied evidence of past human activities dating from the Mesolithic through to the medieval period. The majority of this activity dated to the Neolithic and Bronze Age periods and included a significant Early Bronze Age cremation cemetery.

The factors that affect the outcome of archaeological investigations on linear developments such as the A477 road scheme are well known. The area available for investigation is limited to the narrow width of the development, and projects such as this one often pass across undeveloped and sometimes remote tracts of land where little previous investigation has taken place, and it is harder under these circumstances to envisage how the activity encountered sits within the landscapes of the past.

Although these factors certainly applied to the A477 road scheme, a great deal has been gained from the analysis of our discoveries along the corridor of road development. Interpretation of the prehistoric evidence has considerably benefited from the recent archaeological investigations during the construction of the Milford Haven to Aberdulais gas pipeline replacement, a stretch of which bisects the A477. In 2006 these pipeline works uncovered evidence for a prehistoric landscape of some significance, including the Class II Neolithic Henge lying some 225m to the south of the A477 road redevelopment at Vaynor Farm (PDF 7.7 MB). The knowledge gained from investigation of this earthwork, which probably remained visible in the landscape throughout the later prehistoric period, has enriched our interpretation and understanding of the archaeological remains along this stretch of the A477 development corridor.

Three locations along the road scheme were notable for the evidence of Mesolithic activity they revealed (Sites 25, 26 and 35). At Site 25 north of the town of Llanddowror a large concentration of flints and a posthole dated by a radiocarbon sample to the late Mesolithic suggest substantial use of the location. The site was on the floodplain of the River Taf, and no doubt favoured by those who used it for its easy access to a range of habitats and their natural resources. Early Neolithic evidence is also present here and hints at continuity, charred seeds and charcoal found in pits suggests the local woodland had been partially cleared for settlement, arable cultivation and possibly pasture. Transient Mesolithic activity was also indicated along the A477 road scheme to the west of Llanddowror at Sites 26 and 35 where small scatters of Mesolithic flakes and microblades were retrieved from the interface between the ploughsoil and underlying natural substrate.

A substantial Neolithic presence was identified at Site 37, east of Rhosgoch, Llanddowror, where postholes, pits, hearths and pottery provide rare evidence for domestic use. The site is also notable for the nature of the fills of some of the pits which were rich in finds including worked flints, whole (but broken) pots and burnt grain suggesting the deliberate placement of material in the pits.

An interesting aspect of the prehistoric remains from the road scheme was an apparent lack of activity that can be ascribed to the middle or Late Neolithic periods. This may be explained by shifting patterns of settlement, but we may also consider the possibility that the Neolithic henge at Vaynor influenced patterns of activity in the area, creating a tradition for ceremony rather than settlement that persisted into later periods.

In the section of the road scheme that ran close to the henge, traces of a Bronze Age barrow were discovered, together with a swathe of cremation burials and the site of pyres (Sites 18, 19 and 26).

These remains have benefited from in-depth analysis, from which an interpretation of the funerary monuments has emerged. Bayesian modelling of the radiocarbon dates by Frances Healy has enabled events to be modelled with a greater precision than would otherwise have been possible, and has also allowed a subtle chronological modelling of the activity within the barrow area in relation to the adjacent pyre site and surrounding features. The dates indicate a period from approximately 2000 BC to 1650 BC during which the burials took place.

With 38 deposits of human bone found in their primary locations, and further deposits in residual contexts, there were opportunities here to study the varied and variable nature of burial practices at this time and to compare this evidence with contemporary published data. Analysis of the human remains revealed that even the most ‘complete’ of the cremations did not represent a complete individual, even where the deposit has survived intact. Some cremations were contained within pottery urns, inverted or upright, or associated with empty vessels (accessory vessels) within the same grave pit (see below).

Some cremations were buried alone in grave pits or stone-lined graves (cists), and many pottery vessels appeared to have been buried without accompanying cremated remains. A number of the excavated features can be understood as the physical remains of aspects of ritual performances taking place on the site that may not have always included the act of cremation.

Another notable prehistoric site revealed by the road scheme investigation was the burnt mound located towards the western end of the road scheme at Site 32 near Red Roses. The mound, which was located adjacent to a watercourse, was composed of a mix of dark grey sandy silt, charcoal and burnt stone measuring approximately 15m long by 12.5m wide (see below). It was associated with two trough-shaped pits that may have held water. The purpose of these burnt mound sites remains obscure, but the most common theories are that these were used for cooking or were sauna sites.

Many of the undated features excavated along the length of the road scheme have been assigned to the prehistoric period based on similarities in fills and form, and the overall impression is of a landscape more heavily utilised in the prehistoric than later periods.

Archaeological evidence for activity along the road corridor of a date later than the Bronze Age was sporadic. Evidence for Roman activity was extremely sparse, but there was some dating from the medieval and post-medieval periods. Just to the south-east of St Clears lies the earthworks of Dolgarn Moated Site (Scheduled Monument CM 252), which was visible as a rectangular enclosure measuring 60m by 50m, defined by a ditch surrounding a slightly raised platform, and cut through by the old Turnpike road. The route of the new road crossed the south-eastern corner of the earthworks, providing an opportunity to excavate the ditch and a small part of the internal platform. Excavation showed the internal platform to be composed of horizontal deposits; these contained no dating evidence but were probably derived from the soil dug during the ditch’s construction.

The earthwork ditch proved to be 6.5m wide and 1.6m deep with a u-shaped profile. From one of the earliest of the ditch fills a carbonised seed was radiocarbon dated to cal. AD 1059–1263 (SUERC-50312). The fill above this produced 13 sherds of medieval pottery, 12 of these from a single vessel, almost certainly of locally made Llanstephan ware, dateable to the 13th to 14th centuries AD. All the pottery recovered from the later fills dates to the 13th to 15th centuries, and the absence of later material suggests that the monument was abandoned in the 15th century.

The analysis of a well-preserved assemblage of waterlogged insect, pollen and plant remains from the sequence of fills suggests that the ditch originally contained clear running water, although the levels of this had fluctuated, and that the immediate environs comprised a mixture of cultivated ground and pasture; the presence of dung beetles indicative of grazing animals nearby. As the ditch silted up the water within it had become murkier, and a decline in certain insect species indicates that there was less grazing nearby.

Dyfed Archaeological Trust Historic Environment Record (DATPRN 3884) suggested the Iron Age, Roman or medieval periods as possible dates for the monument, which had not been professionally excavated before.

Although earlier origins cannot be discounted, our investigations would suggest that the monument in its surviving form is a medieval construction.

Approximately 0.7km north of Red Roses, at Eglwyscumm, a cluster of ditches and robbed out foundation trenches indicate the location of a farmstead (Site 31), comprising at least two rectangular houses and one circular structure situated close to the buildings, with a network of associated paddock and field ditches extending to the south-east. The farm was only partially revealed within the road corridor, and clearly extended beyond the excavated area. Pottery from the features gave a date range of the 13th to the 14th centuries AD. An assemblage of charred plant remains from the ditch of the circular structure provided information on diet, crop-processing and the local environment of the farmstead.

No other sites of medieval occupation were identified although a number of pits and ‘ovens’ were found; the latter, distinguished by scorched bases and abundant charcoal deposits, are likely to have been used to dry cereals at the edges of the fields within which they were grown, prior to transportation for storage within farms or villages. Radiocarbon dates from carbonised organic remains dated most of these features to within the 11th to 13th centuries, with two earlier pits dated to the 4th to 6th and 9th to 11th centuries respectively.

A report on these medieval excavations, and a summary of the prehistoric discoveries will be published in the journal Archaeology in Wales (Hart and Alexander forthcoming).

This work has been made possible through funding from Welsh Government in collaboration with Principal contractor: SRB Civil Engineering UK Ltd (Sisk and Roadbridge Joint venture). Expert archaeological services provided by AB Heritage Limited with Cotswold Archaeology and with scheme design and engineering input from Arcadis and Ramboll.

The post A Bronze Age Cremation Cemetery and Other Prehistoric and Medieval Discoveries on the A477 Road Replacement Scheme, Carmarthenshire appeared first on Cotswold Archaeology.