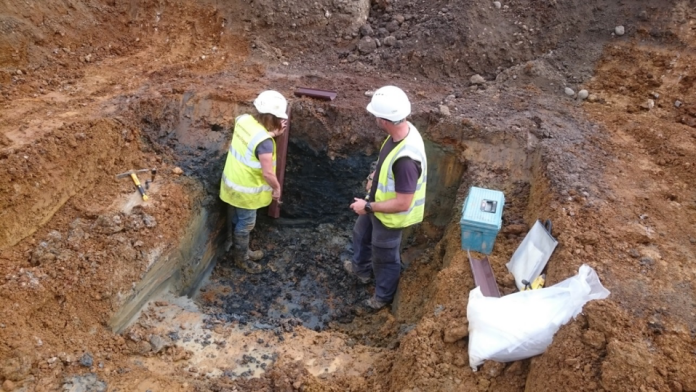 Bovis Homes are currently building new homes on land at Ridgeway Farm, Hillmorton. Ridgeway Farm dates from the 18th century but the archaeological excavations are revealing that it was created in an area that was first settled almost 3000 years ago, in what is commonly referred to as  the later Bronze Age, and which developed throughout the Iron Age, culminating in a farming and pottery manufacturing complex at the time of the Roman invasion in the 1st Century AD. Curiously, by the 2nd Century AD the inhabitants had moved off, perhaps not far, but during the medieval period the site was under the plough as part of the open field system of the village of Hillmorton.

Over the past 3 months Archaeology Warwickshire and CgMs Consulting have devised and implemented a programme of archaeological research that will unpick the detail and interpret what occurred at this unusual and complex site for the benefit and edification of local people, and schools and to provide an invaluable adjunct to the regional dataset for the later prehistoric and early Roman periods which will hugely enhance archaeological research. This report presents some preliminary results.

Outline planning permission for residential development was granted by Rugby Borough Council (Ref R14/0407) on 22nd April 2015). The permission includes a condition requiring the implementation of programme of archaeological work. This had previously entailed a desk-based assessment, a geophysical survey, and a scheme of archaeological trial trenching.  This work revealed that the site contains a sequence of ditched enclosures and field boundaries predominantly of Roman date thought likely to represent the agricultural exploitation of the land between the River Avon and Rains Brook. No-evidence of pre-Roman activity was uncovered.

Although not identified in the geophysical survey or the trial trenching, a Late Bronze Age pit alignment crosses the site. These enigmatic features are now understood to be an early form of land division, locally shown to have been set out after initial forest clearance and initially aligned on existing areas of settlement. Pit alignments are not necessarily strictly functional as they do not create a physical barrier, but they may have been seen more as a line of communication in which ceremony and ritual were equally as important. Of particular importance at Ridgeway Farm is an ‘extra deep’ pit in the alignment which was waterlogged. This will tell us about the local environment, subsistence, forest clearance and animal husbandry – if not farming.  At least one building is associated with this alignment and pottery found within the pits may reveal evidence for contemporary activity.

The building was a roundhouse, now only represented by a 10m diameter pen-annular gully with an east facing entrance. The absence of any internal structural postholes confirms that it was constructed in the regional tradition using turf walls to bear the weight of the roof. The gully may not have had a physical functional, though it could have drained surface water away from the wall, but seems to have been used to define the space in which people built structures or carried out activities.   All the houses in the area face east – to the morning sun.

Iron Age pit alignment and roundhouses (c500 BC – AD 43)
A second, unexpected, pit alignment, almost parallel to the earlier example shows how the original land unit was divided. This was perhaps in a period when the original function was not as relevant as the concept of property boundary, in what was then an increasingly populated landscape. Two segmented gullies to the north probably represent houses relating to this phase of activity.  Some of the pits contained Roman pottery suggesting that they may have been open for a long period of time or at a transitional stage in the settlement story.

By far the majority of features on the site are Roman and mostly 1st Century AD. Morphologically it would seem most likely that they formed a sequence of small enclosures which most readily can be interpreted as stock enclosures and paddocks. Some of these must relate to buildings which lie outside the excavation area although the high density of finds across the site suggests that the buildings are very close indeed. 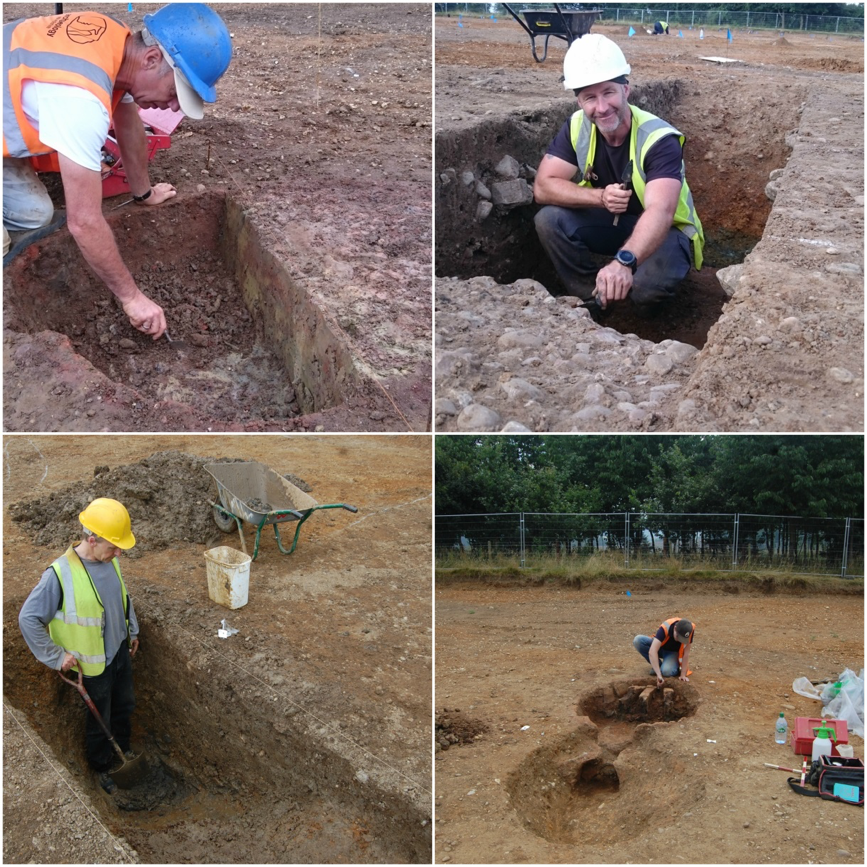 Some of the enclosures relate to pottery or tile kilns. At least three have been found, of which two appear to have produced a particular style of ‘Belgic’ pottery which mimics classical Mediterranean forms. This dates the kilns, and therefore most of the occupation, to the mid 1st century AD and this type of pottery is not generally found west of the Avon Valley. These kilns may therefore be on the very edge of the distribution and are incredibly important in relation to pottery studies.

Several waterlogged features were encountered across the site. These are exceptionally important as they contain preserved environmental data that would otherwise not survive.  Initial assessment suggests that a range of plant macrofossils survive which will reveal what was growing in the surrounding landscape and it is very likely that pollen will be recovered which will augment the results and provide a context for the wider landscape.

THE IMPORTANCE OF RIDGEWAY FARM

The desk-based assessment, geophysical survey and field evaluation described a development site with, at best, moderate archaeological potential. The excavations have shown that this is far from the case as it has gradually emerged as a complex site with demonstrable settlement development extending over 2000 years from the Bronze Age to the medieval period. It is rich in regionally important environmental and pottery production data and will surely be an important adjunct to archaeological study, synthesis and historical understanding for many years to come.

A range of experts will help us to understand the significance of the finds that have been recovered from the site.  So far these include kiln furniture and pottery wasters, animal bone, metal objects including a coin, Roman building material, quern stones, prehistoric pottery, water logged wood, charred plant remains and pollen.  We hope that some of the finds – particularly the almost complete pot (above) will be displayed at Rugby Museum and Art Gallery.

Developing Ridgeway Farm for housing has provided opportunity for remarkable archaeological discoveries. Once the analysis is completed a report will be produced which will interpret the detail and set the site as one of the most important in the area for its range of environmental and pottery production data. It will reveal how the earliest settlers in the area lived and coped with changing economic and environmental fortune and how the last settlers before the modern period abandoned the site for pastures new.

Main Image:  A column sample being taken by archaeobotanists from the ‘extra deep’ Late Bronze Age pit. Dates obtained down the column could reveal environmental changes over time